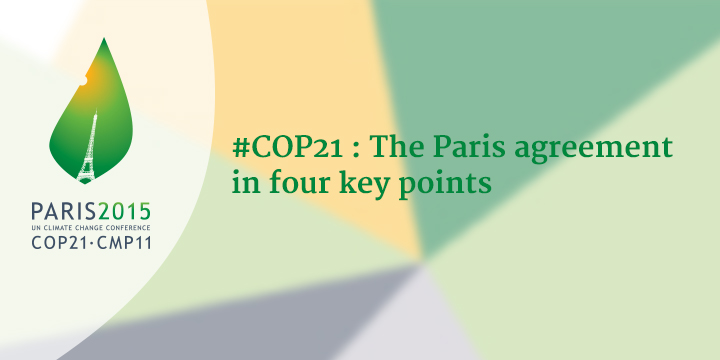 In response to the climate challenge, the agreement recognises that States have common but differentiated responsibilities, depending on respective capabilities and different national circumstances. It takes into account the level of development and the specific needs of particularly vulnerable countries, for example. Beyond making financial commitments, industrialized countries will need to facilitate technology transfers, and more generally, adaptation to a low-carbon economy.

In terms of transparency, a system for tracking national commitments, which is slightly flexible for developing countries, has also been set up to keep track of everyone’s efforts.

The purpose of the agreement is to hold the increase in global average temperature to well below 2°C above pre-industrial levels and to ensure that efforts are pursued to limit the temperature increase to 1.5 °C.

To achieve this, it stipulates that all countries shall review their contributions to reducing greenhouse gas emissions every five years. Every new nationally determined contribution will need to be more ambitious than the last.

The 195 States Parties involved in the negotiations committed to drawing up long-term low greenhouse gas emission development strategies. This is the first time that a universal agreement has been reached in the fight against climate change. Certain legally binding rules will apply to the States Parties, such as the obligation for developed countries to provide developing countries with financial support to enable them to implement the agreement.

The agreement will be opened for signature by the States on 22 April 2016 and should enter into force in 2020. The COP21 decision that accompanies the agreement sets out a number of stages in the preparation for its implementation, including a review of contributions in 2018, and mobilization of financing to reach a floor of $100 billion per year by 2020.

The agreement recognizes the action of non-governmental actors, who are already mobilized, as illustrated by the Paris Pledge for Action (link), through which 800 businesses, investors, cities and regions worldwide have committed to meeting or exceeding the level of ambition set out in the Paris agreement.