From Tokyo to Paris

Two days before the Closing Ceremony and Handover with Tokyo 2020, Tony Estanguet, President of Paris 2024, and Anne Hidalgo, Mayor of Paris, took the opportunity to share Paris 2024’s ambition at a press conference in Tokyo. 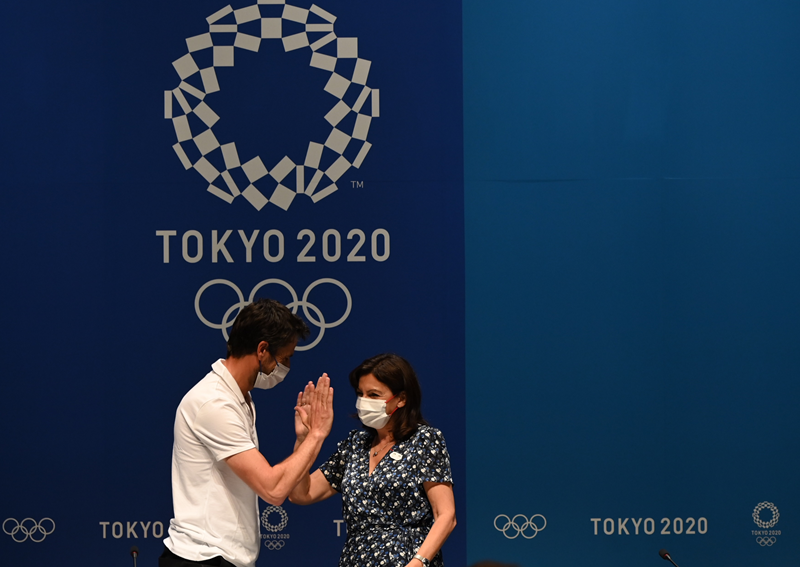 One hundred years after their last appearance in France, in 1924, the Olympic and Paralympic Games are making their comeback in Paris, and will open a new chapter in the Olympic story.

“Each edition of the Games contributes, in their own way, to enriching the Olympic experience. Our ambition for Paris 2024 is to offer Games that will be open to people like never before,” said Tony Estanguet.

The Paris 2024 Games will be open to the city, with spectacular, temporary competition venues at the foot of some of the most beautiful French landmarks such as the Eiffel Tower, the Grand Palais or the Château de Versailles. The Paris 2024 Games also has the ambition of staging the first Opening Ceremony in the city, thus allowing hundreds of thousands of spectators to participate in a unique experience along the Seine.

Paris 2024 also aims to promote Games that will be open to the participation of everyone, especially through the first mass participation events in the history of the Games – the marathon and road cycling events – staged on the same courses and on the same day as the elite races.

Finally, Tony Estanguet and Anne Hidalgo shared the ambition of Games that are open to society, and that provide tangible responses to major social challenges. Paris 2024 has an ambitious environmental strategy, aiming to halve the carbon emissions of the Games compared to previous editions. The Paris 2024 Games have also already given impetus in France to the fight against the sedentary lifestyle among young people, by collaborating with the Ministry of National Education, to implement a daily 30-minute program of physical activity in primary schools, that will be rolled out by 2024.

Anne Hidalgo, Mayor of Paris: “It is with great emotion that I will bring home the flag from Tokyo in the company of the victorious French athletes and the Olympic values of openness, excellence, effort and fair play. The prospect of gathering in 2024 for Games that are respectful of host nations and which carry the ambition of a more sustainable city, will motivate all our efforts.”

The world’s largest flag ever flown unfurled at the top of the Eiffel Tower to announce the arrival of the Games in France, then recycled in collaboration with Decathlon

After 15 days of competition, where emotions of sport have triumphed, the official Handover between Tokyo 2020 and Paris 2024 will be one of the highlights of the Closing Ceremony that will take place on Sunday, the 8th of August, at the Tokyo Olympic Stadium. The governor of Tokyo, Yuriko Koike, will hand the Olympic flag to the Mayor of Paris, Anne Hidalgo.

True to its desire the rethink each key element of the Games to infuse audacity and creativity, Paris 2024 will give a unique dimension to this moment which symbolises the arrival of the Games in France. A giant flag bearing the emblem of Paris 2024 will be displayed on the side of the most famous landmark in Paris, the Eiffel Tower.

This flag will be in the image of the Paris 2024 Games: spectacular, by its size (5,000m²) which makes it the largest flag ever flown in the world; audacious, with the challenge of transforming one of the world’s most famous landmarks into a giant flagpole; and shared, this flag will be visible throughout Paris and its surrounding areas.

Thanks to Paris 2024’s recent partnership with French company Decathlon, this flag will be given a new lease on life after the Tokyo Games. As part of a circular economy approach, the flag will be reused to create a collection of clothing specially designed to celebrate the arrival of the Games in France. Fans of the Games will be able to discover this exclusive collection for presale launching soon.

Paris 2024 also used the press conference to invite the world to gather on the 8 of August for the Handover Ceremony in the company of France’s Tokyo 2020 medallists. They will be present at the ‘Live des Jeux’ at the Trocadéro to celebrate the arrival of the Games at home.