Highlights of the Presidential visit to Sydney [fr]

From the 1st to the 3rd of May 2018, the President of the French Republic, Emmanuel Macron, visited Australia for a working visit. This visit comes just one year after he welcomed the Australian Prime Minister Malcolm Turnbull in Paris.

You will find a detailed account of each sequence, including photos and videos of the working visit below:

Emmanuel Macron landed at Sydney airport where he was welcomed by the Ambassador of France to Australia, Mr. Christophe Penot. 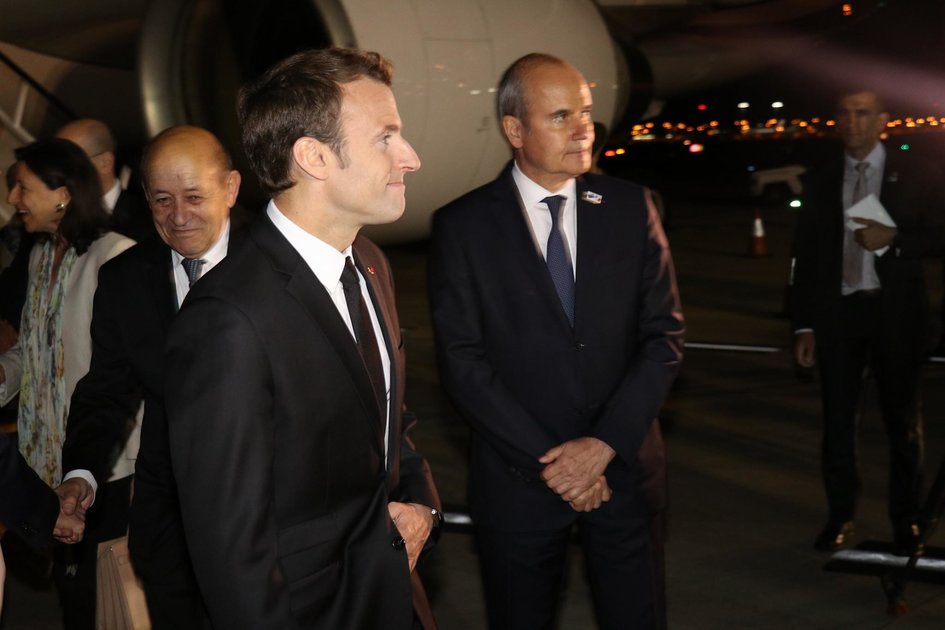 To begin the visit, the President went to Circular Quay where he gave his first press briefing to French journalists, in which he announced the main objectives of his visit to Australia and then to New Caledonia.

On this occasion, he not only highlighted the wonderful momentum behind the French-Australian relationship but also mentioned that the upcoming commemoration of World War I (1918-2018), the free trade agreement between Australia and the European Union and the Australian submarines contract awarded to Naval Group would be the main topics discussed with the Australian Prime Minister. 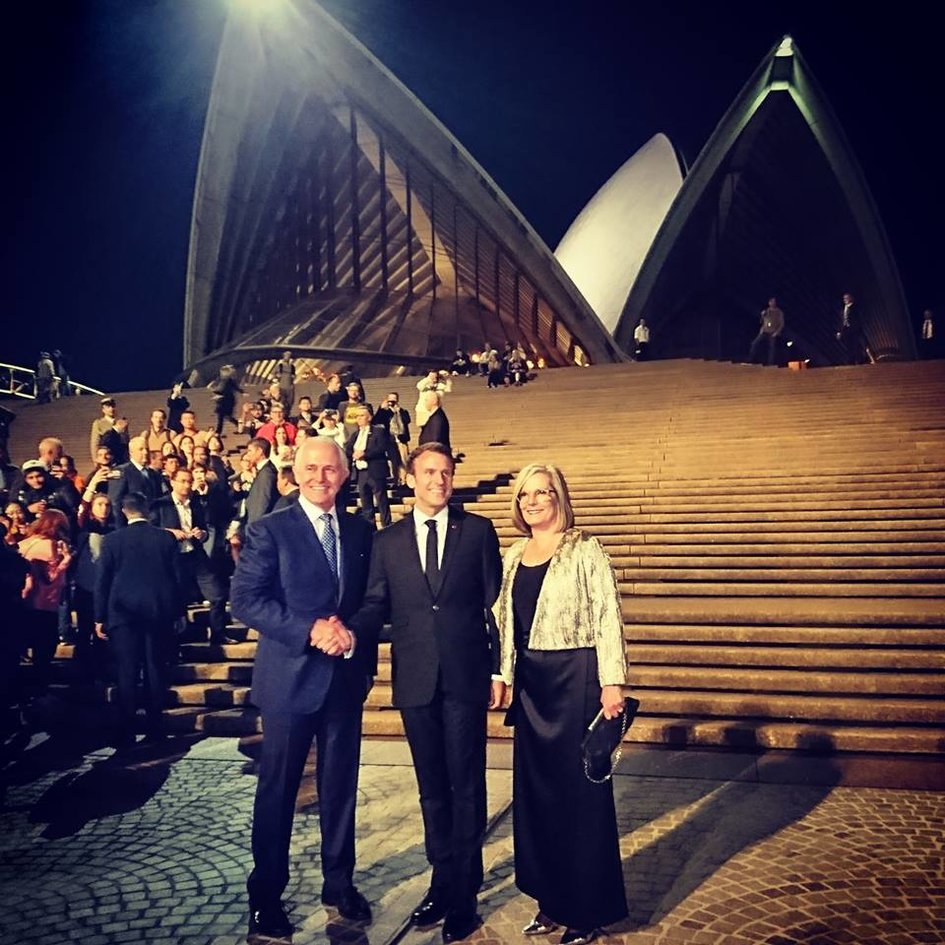 After the press briefing, President Emmanuel Macron was welcomed by the Australian Prime Minister Malcolm Turnbull and his wife Lucy Turnbull on the steps of the Sydney Opera House. With Louise Herron, General Manager of the Sydney Opera House, they attended a sound and light show projected onto the facade of the building. This was followed by an official dinner at the Opera House, where the French President gave his first speech in Australia.

President Macron and Prime Minister Turnbull began this second day with a ceremony at the Anzac Memorial in Hyde Park, to pay tribute to Australian soldiers on the occasion of the centenary of the end of World War I. A few days before, Malcolm Turnbull, together with the French Prime Minister participated in the Anzac Day commemoration in Villers-Bretonneux and in the official opening of the John Monash interpretation centre. 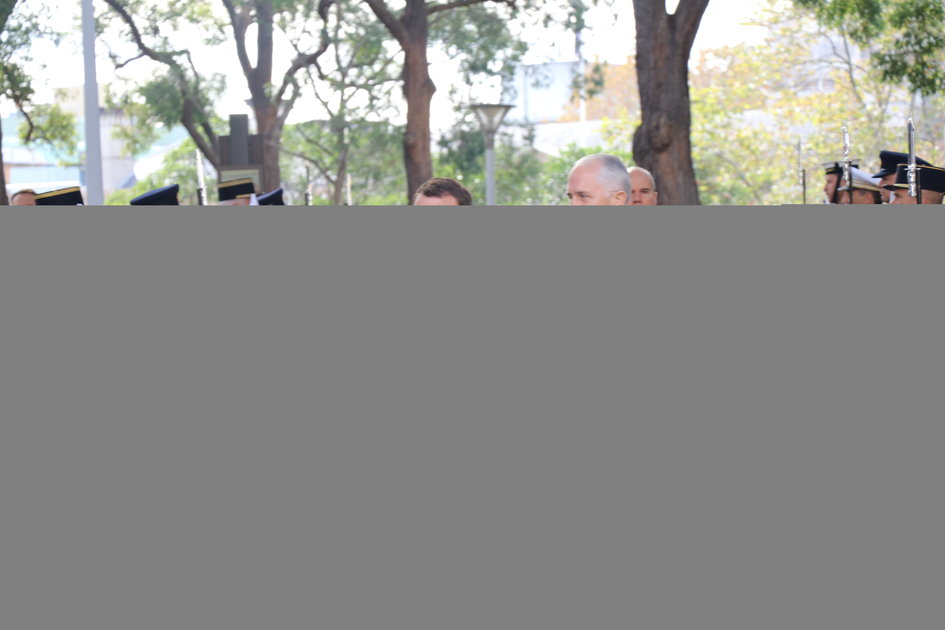 During the ceremony at the Anzac Memorial in Hyde Park, several students from the Lycée Branly in Amiens, the Lycée Franco-Australien in Canberra and the Lycée Condorcet in Sydney presented their school projects about the lives of Australian and French soldiers. 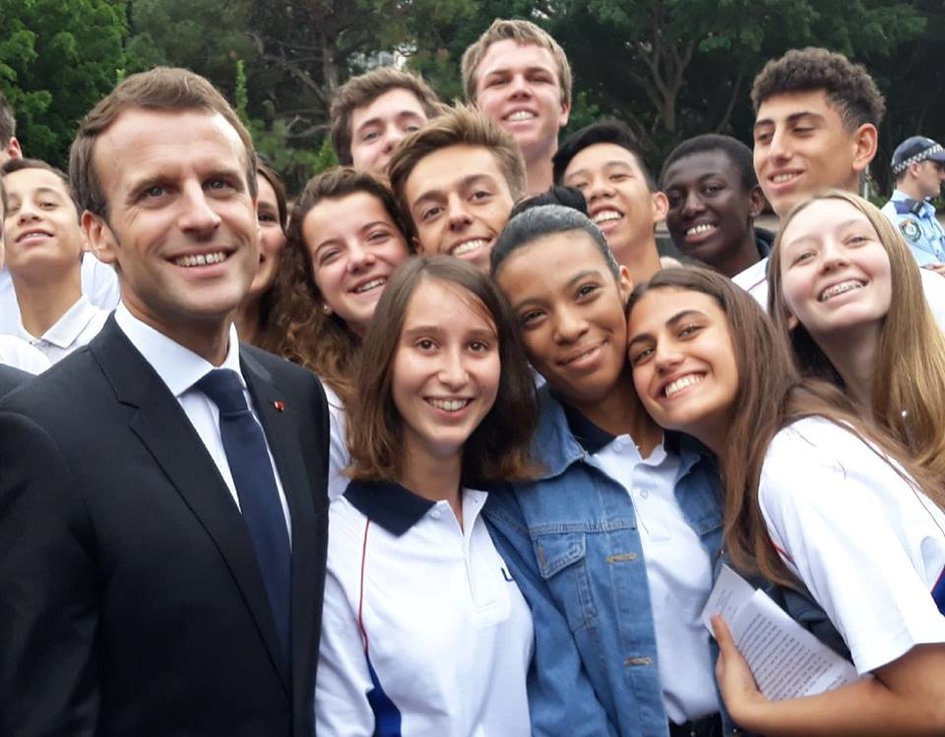 They also read letters written by World War I soldiers, highlighting the importance of remembrance and commemoration for both our countries. 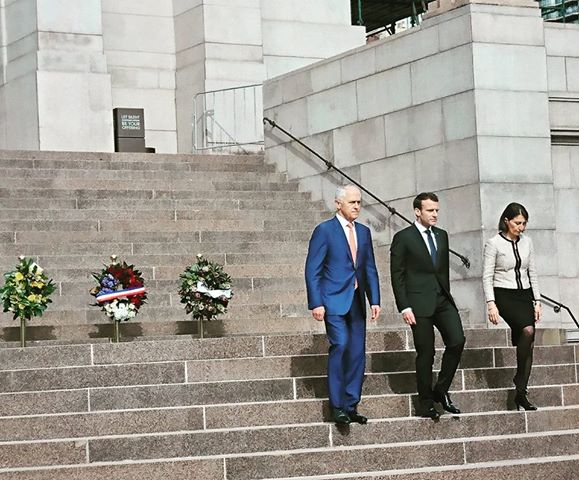 At the end of the ceremony, the French President bestowed three Australian World War II veterans with the insignia of knighthood of the Legion d’Honneur: MM. Louis Solomons, William Mackay and Norman Saunders. 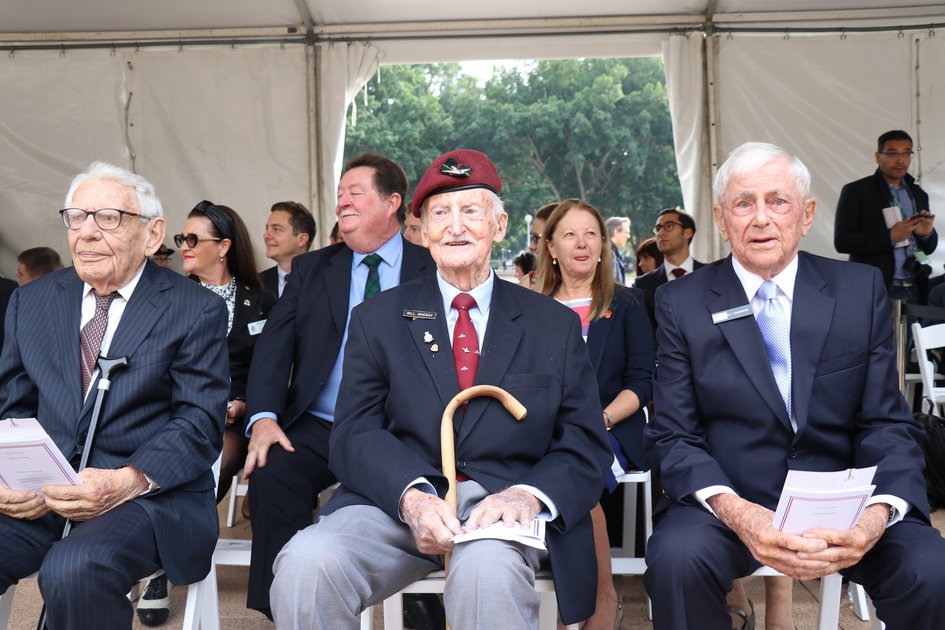 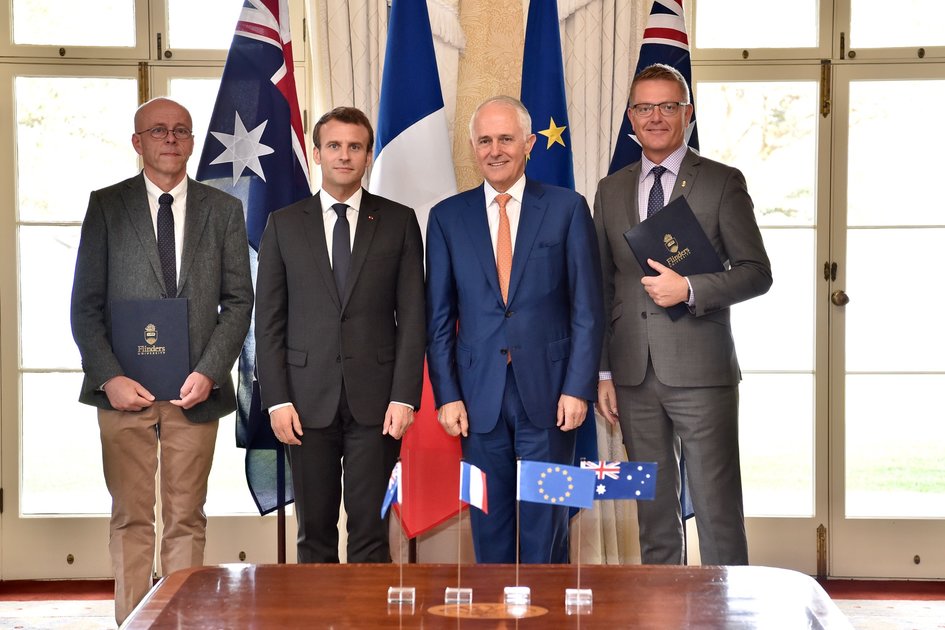 After these meetings, President Macron and Prime Minister Turnbull attended a ceremony to sign intergovernmental agreements on cybersecurity and logistical support between Australian and French armies. 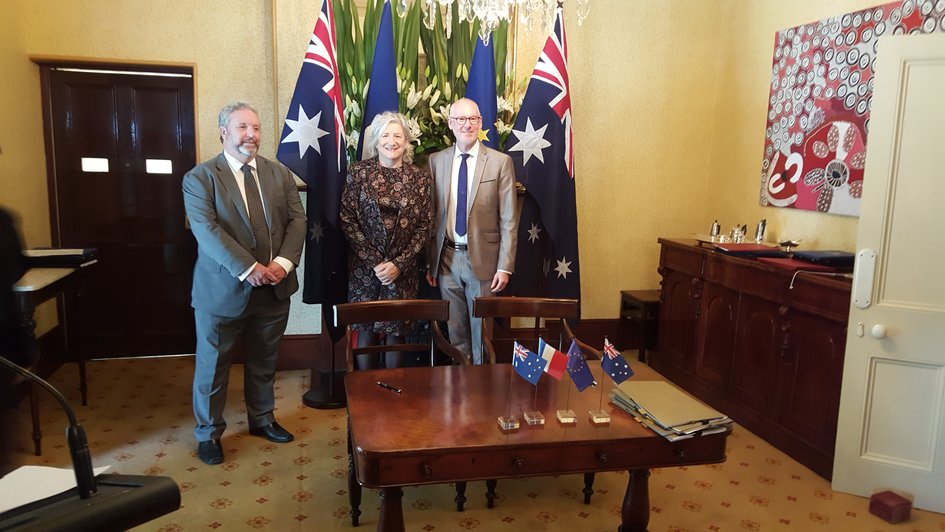 During this ceremony, university and research agreements, covering a diverse range of fields, such as mathematics, photonics, quantum computing, solar energy, space, cancer and the ecology were also signed. 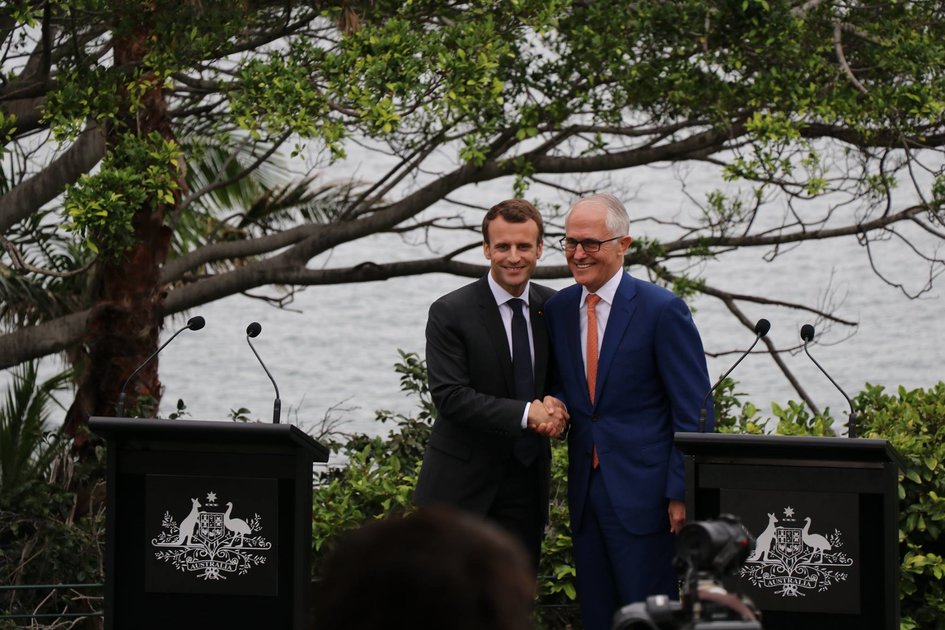 Following the signature of these agreements, President Macron and Prime Minister Turnbull gave a joint press conference at Kirribilly House, the Prime Minister’s official residence in Sydney, to share their vision of the French-Australian bilateral relationship.

After that, President Macron departed Kirribilly House to attend a lunch showcasing French products and food at Bistro Guillaume. There, the President of the French Republic was first welcomed by Mr Guillaume Brahimi, the chef and owner of the restaurant and then had the opportunity to talk with other chefs and professionals who promote the art of French cuisine and wine in Australia. President Macron also had the opportunity to speak to the young French people who are currently in Australia on a Working Holiday Visa. 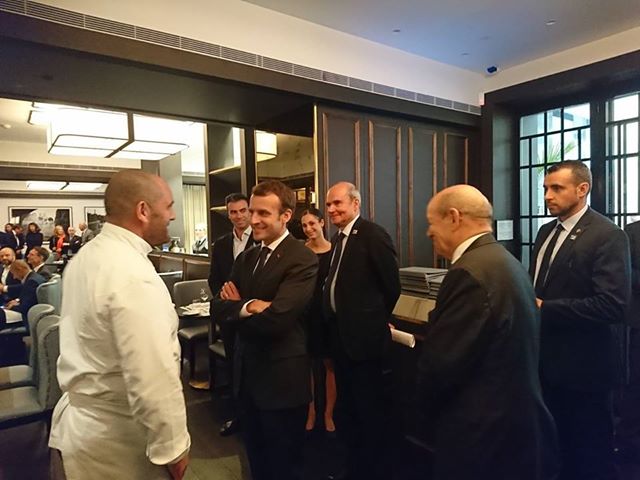 Later that afternoon, Emmanuel Macron joined Malcolm Turnbull at the Australian naval base at Garden Island as part of the visit to showcase the French-Australian strategic partnership, particularly in the Indo-Pacific region. 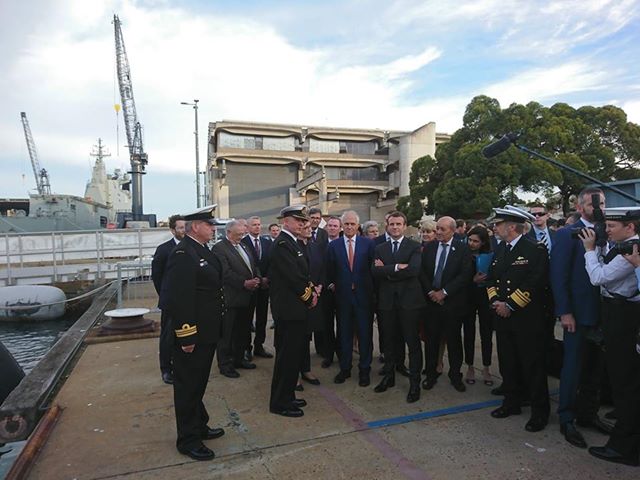 Several highlights of this visit: 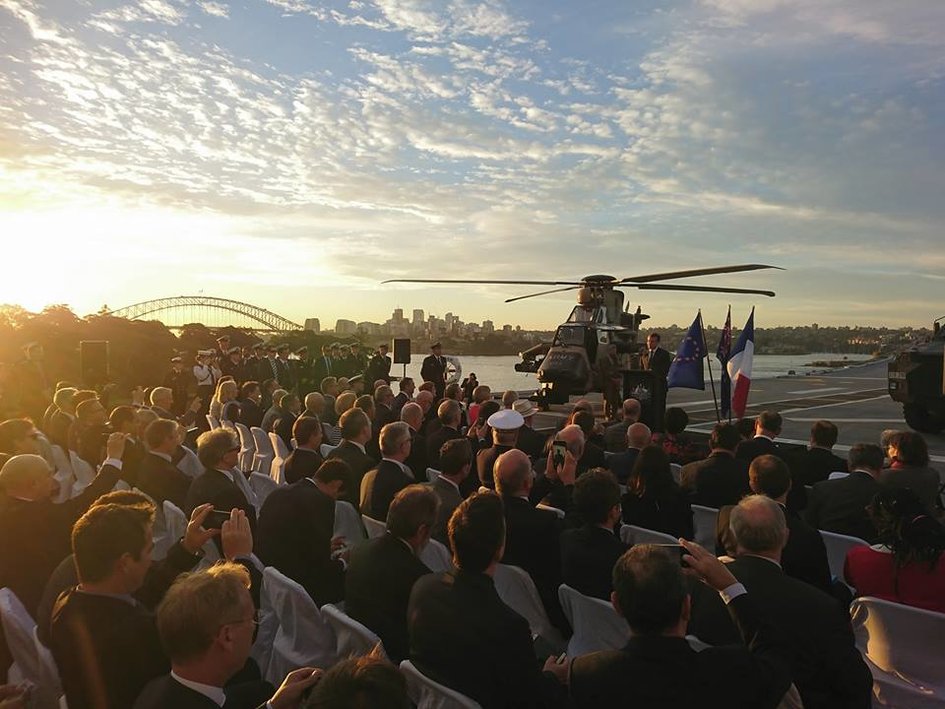 Jean-Yves le Drian, Minister of Foreign Affairs and Europe attended a presentation on the OneSky project by Thales, as well as the launch of the acceleration program ‘Maritime connection days in Australia’, a program which will be help several French SME’s and mid-caps to be established within Australia.

Emmanuel Macron then met with the French community at a reception within the Art Gallery of New South Wales, where “The Lady and the unicorn” tapestries, from the Paris Cluny Museum, are currently on display.

For the final day of his official visit to Australia, Emmanuel Macron met Malcolm Turnbull at Carriageworks – one of the official hosts of the 21st Biennale of Sydney, where they attended a reception with invited guests from the Aboriginal cultural and arts community. 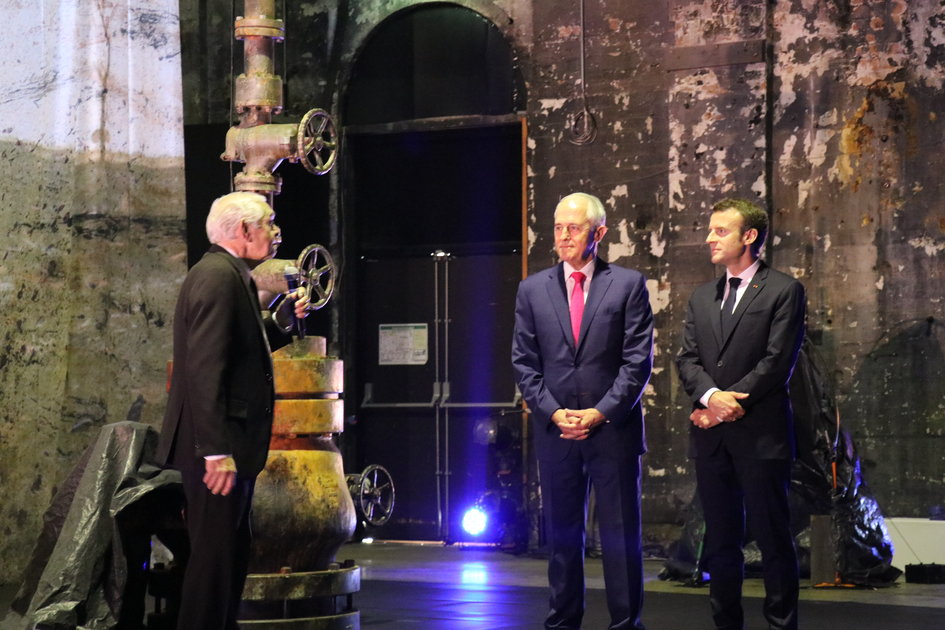 After a Welcome to Country address by an Aboriginal official and a tour of the exhibition part of the gallery, the French President and the Prime Minister of Australia watched a performance by Aboriginal dancers, before engaging in discussions with Aboriginal artists and thinkers. 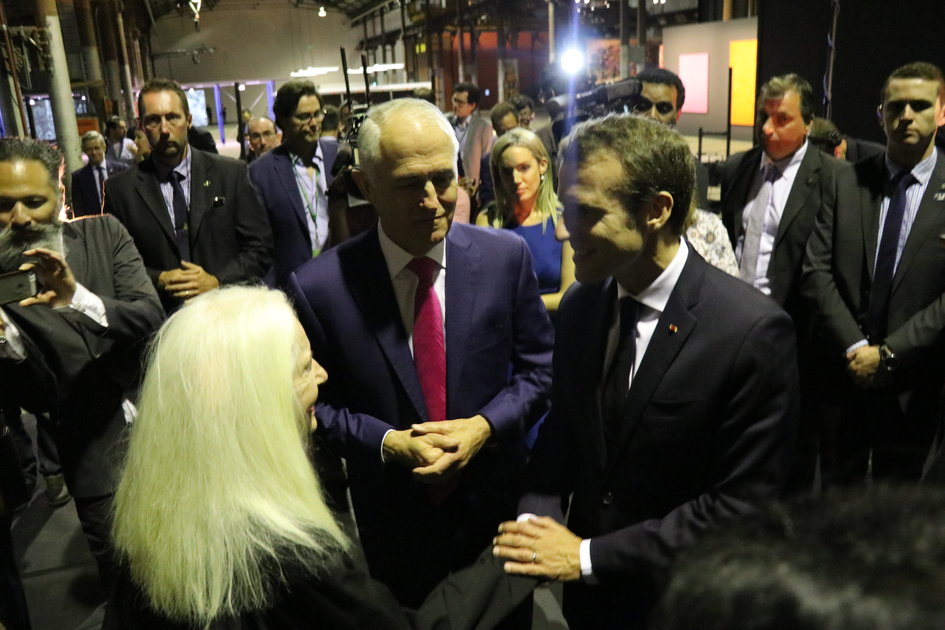 Following the reception at Carriageworks, the French President flew to Nouméa, thus concluding the second official visit to Australia made by a President of the French Republic.